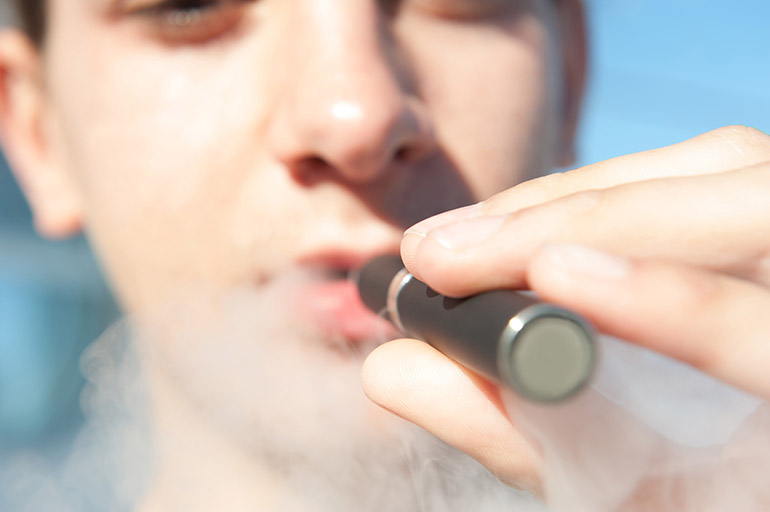 A young person vaping an e-cigarette.

E-cigarette companies know how to target their products

UBC researchers are raising the alarm about the increase of vaping among teenagers and how e-cigarette marketing strategies target youth.

Assistant Professor Laura Struik, who teaches in UBC Okanagan’s School of Nursing, recently published a paper examining why teens take up vaping and whether advertising capitalizes on those reasons.

“This is the first study of its kind that makes direct links between reasons for youth uptake and the marketing strategies of e-cigarette companies,” says Struik. “The public needs to know how the next generation is being targeted to take up and ultimately become addicted to these nicotine products.”

Struik conducted the study with Assistant Professor Sarah Dow-Fleisner, who conducts research in the UBCO School of Social Work on development trajectories and resilient functioning of children and families in high-risk contexts.

The researchers say there are a variety of reasons teens take up vaping—ranging anywhere from managing stress or anxiety, curiosity, taste, peer pressure, easy access and even factors like it’s easy to hide from parents and is perceived to be less harmful than cigarettes.

When e-cigarettes first entered the North American market in 2008, they were hailed as a smoking cessation tool. However, Dow-Fleisner says when they take a closer look at who uses them, it’s clear teens do not use the products to quit smoking.

“According to recent statistics, only three per cent of Canadian youth in grades 7 to 12 are current smokers—while 20 per cent use e-cigarettes,” she says. “This suggests that upwards of 17 per cent of e-cigarette users were originally non-smokers. In addition, among youth who do smoke combustible cigarettes, fewer than eight per cent of those report using e-cigarettes to quit smoking.”

Recent polls found that 95 per cent of teens said they were curious about vaping so they wanted to try it, while 81 per cent tried an e-cigarette because a friend vaped, and 80 per cent reported continued e-cigarette use because they enjoyed the good flavours. More than 70 per cent of the teens agreed e-cigarettes were “cool and fun.”

Despite emerging evidence of both short- and long-term health risks associated with vaping, Struik says the evidence is clear the other reasons teens take up vaping override the health risks.

“Youth don’t make the decision to vape because they don’t understand the risks or don’t care about the risks,” she says. “Young people are taking up vaping for a variety of reasons and e-cigarette companies are leveraging those diverse reasons to recruit teens into using their products. And it’s working.”

“The TV advertisements we reviewed were found to tap into almost all of the reasons youth cite for taking up e-cigarettes,” says Dow-Fleisner. “The most highly-cited reasons were most prominently presented in the ads, including a focus on relational aspects of vaping and product-related benefits, such as a positive sensory experience.”

A noteworthy finding is that vaping advertisements do promote e-cigarettes as a way to enhance your social life, says Struik.

“This is particularly concerning because teens are at a developmental stage when establishing a social identity is of utmost importance to them,” she says. “It has been found in previous research that forming an identity around other forms of tobacco use, like smoking, results in resistance to health promotion efforts. So, we may have a more challenging context to work with than originally thought when it comes to intervening.”

Youth vaping is a concern, she adds, and there is a growing need for comprehensive strategic plans to curtail their use of e-cigarettes.

“It is clear that we need to bring youth to the table to understand how we can generate relevant information and interventions to support their decision to not vape,” says Struik. “Our health promotion efforts need to keep up by accommodating the various reasons youth report vaping, and youth need to be meaningfully included to navigate this issue.”

The research was published in the Journal of Medical Internet Research.