UBCO student receives gift of a lifetime from younger sibling 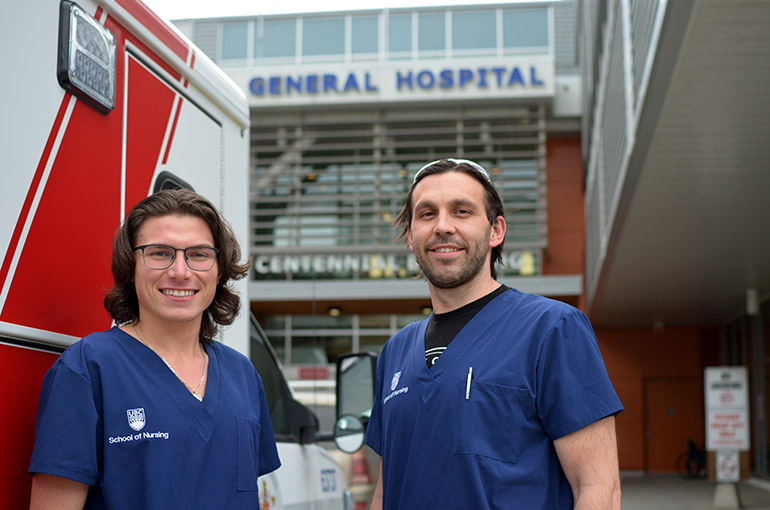 Brothers, Adrian, left, and Quinn Van de Mosselaer took dramatically different paths leading to them joining the School of Nursing as first-year students. The Shuswap Nation brothers, who live together, take a break outside Kelowna General Hospital after a clinical session.

Transition from hockey enforcer to nurse, inspired by Christmas gift

Most gifts from a younger sibling are rarely memorable. But for Christmas 2019, Adrian Van de Mosselaer received a present from his brother that would change his life.

The older Van de Mosselaer was trying to find a path after his professional hockey career wrapped up. While he had toyed with the idea of returning to school for many years, something kept him from taking that important step to actually register for classes. On an annual basis, he checked in with UBC Okanagan’s Aboriginal Programs and Services (APS) staff to discuss the Aboriginal access studies program. But it always ended there.

It was Quinn Van de Mosselaer, eight years Adrian’s junior, who bought his older brother high school textbooks for upgrading that Christmas and created a path for Adrian to enrol in Okanagan College courses. Those books, once cracked open, led to a spot in UBC Okanagan’s School of Nursing.

“I would always question myself but I hit a tipping point when my brother bought me the books and said, ‘That’s it, time to go to school,’” says 30-year-old Adrian. “I never thought I’d be relying on him to stand up and do that.”

Adrian embraced learning—partially to show his little brother he could do it — and partially to thank Quinn for believing in him.

“When I got that first good grade back, I couldn’t believe it,” he says. “I earned 100 per cent on a biology test. It was so good to know I could do the work. I was beyond grateful. Pure happiness.”

Through a twist of fate, Quinn, although starting his post-secondary journey earlier, is now in the first-year nursing program with Adrian. Those books, he says, might go down as the best Christmas present he’s ever bought and the Whispering Pines/Clinton Indian Band members are now study buddies.

“I know my brother pretty well. I know he was procrastinating. I knew if I bought him the books, it would push him to do it. And once he puts his mind to something, he can do it,” says Quinn who was initially tracking towards a science degree.

For Adrian, taking part in the clinical studies at Kelowna General Hospital is a long way from his first career path as a professional hockey player. He started his junior career with the Western Hockey League’s Edmonton Oil Kings before moving on to playing three aggressive years with the East Coast Hockey League’s team Ontario Reign, based in California. His role leaned more towards keeping the opposition honest and sticking up for his teammates.

“I wanted to be that heart-and-soul kind of guy. My teammates knew I would stand up for them in any situation. Except maybe in a shootout,” recalls Adrian with a laugh.

When professional players try to take their game to the next level, this gritty play often generates attrition on both benches. It was when teammates were taken off the ice due to injury that Adrian’s interest in healing initially sparked.

“When guys got hurt, I was curious about what was happening in the training room. I was curious on how they got put back together,” he says. “I ended up suffering a head and neck injury and that made me re-evaluate what I was doing. How much of this could I really sustain?

“Then my cousin sat down and chatted with me about school. It stirred that curiosity within me,” he says. “But my self-doubt was huge.”

Making the transition from pro hockey life to full-time student was paved with second guessing his own abilities. Negative previous experiences in school, and fear of the unknown, held him back.

Now, he wonders what took him so long.

“The best advice I have for people is to be patient with yourself. Don’t hold yourself to any thoughts of not being capable. You have to let go of who you think you are and the limits on what you think you can do,” he adds. “What stuck in my head is that I wanted to help people to heal.”

After getting his nursing prerequisites in order, Adrian applied to UBCO’s nursing program. He was successful and he and credits the APS staff for supporting his journey.

Once accustomed to being cheered from the sidelines for acting as a hockey enforcer, Adrian is now aware he has a new team of supporters fully behind him. And he has no intention of letting them down.

“Being a student is beyond exciting. The patience and understanding I received from APS Student Advisor Kelly Fosbery and the team helped me along to UBCO. I know the team is rooting for me the whole way.”